For patients with Congenital Sucrase-Isomaltase Deficiency (CSID), living with postprandial symptoms such as chronic diarrhea, abdominal pain, distention, gas, and bloating is difficult and can limit quality of life.

While their ages are very different, both patients exhibit the typical symptoms associated with a carbohydrate malabsorption, which could be caused by CSID. These symptoms merit further investigation to reach the right diagnosis and select the best treatment approach.

In patients with CSID, reduced or absent sucrase-isomaltase enzyme activity results in the presence of undigested dietary sugars and starches in the lumen of the small intestine and the colon, which accelerates the transit time of the entire meal through the small intestine. Colonic microflora then metabolize the unabsorbed substrates. Sucrose is the most clinically significant substrate because it results in rapid fermentation, which releases methane, hydrogen, and carbon dioxide gases and causes abdominal pain, flatulence, bloating, and abdominal distention. 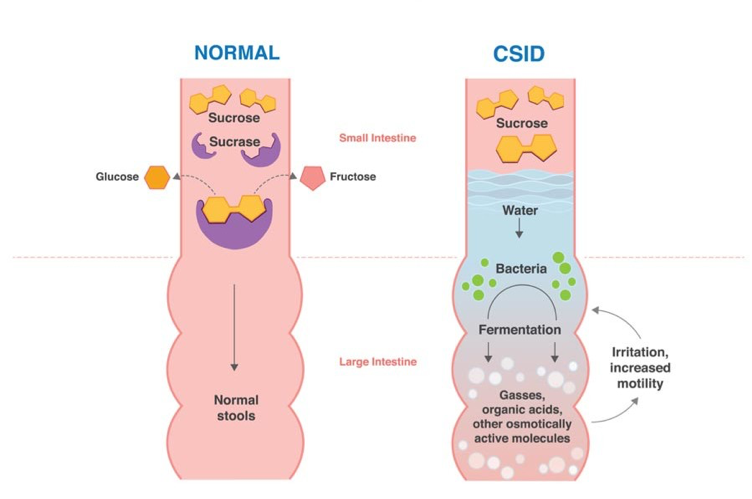 Figure 1. Normally, dietary sucrose (yellow) is digested by sucrase into two subunits, glucose (gold) and fructose (pink), which are rapidly absorbed into the bloodstream, resulting in normal stools. With CSID, sucrase is absent or dysfunctional and dietary sucrose is not digested into its two subunits. Thus, sucrose is not absorbed by the small intestine and undergoes bacterial fermentation in the large intestine. The fermentation byproducts are gases, organic acids, or other osmotically-active molecules, causing postprandial abdominal distention and pain, and water retention producing watery, acidic diarrhea. Symptom severity can vary, depending on the amount of sucrose and starch ingested and the degree of sucrase and/or isomaltase enzyme activity present.

Overall, the reduced absorption of essential nutrients can lead to malnutrition and failure to thrive in children, or low body weight in adults. Moreover, accelerated bowel transit can hinder the absorption of other nutrients such as fat and monosaccharides, as well as impair the function of normal, postprandial hormones that regulate gastrointestinal processes such as insulin, gastric inhibitory peptide, peptide YY, GLP-1, and C-peptide.3,4

Chronic symptoms of CSID may include:

Symptoms in infants with CSID usually manifest when they are weaned from breast milk and start to ingest foods containing sucrose and starches, such as juices, teething biscuits, baby-food fruits, and medications sweetened with sucrose. Symptoms are usually more severe in children than in adults because they have shorter small intestines and a reduced reserve capacity in the colon to absorb excess luminal fluid.1,2

Although symptoms persist in adults, they may be less severe than those observed in children. Adults may note an increase in bowel movement frequency with loose stool form, and experience diarrhea only after ingesting food containing high levels of sucrose. They may also alternate between diarrhea and constipation depending on their diet and use of anti-diarrheal medications, which might mask classical CSID symptoms, thus leading to a misdiagnosis of mixed-type or diarrhea predominant irritable bowel syndrome (IBS).

While most individuals affected by CSID present with classic symptoms, many are given a nonspecific diagnosis of toddler’s diarrhea as infants and young children. Many patients who achieve normal growth are not diagnosed with CSID until they are between the ages of 2 to 8 years, or even later in adolescence or adulthood. A careful evaluation of symptoms will inform the next steps for diagnosing carbohydrate-malabsorption attributed to an enzyme deficiency such as CSID. 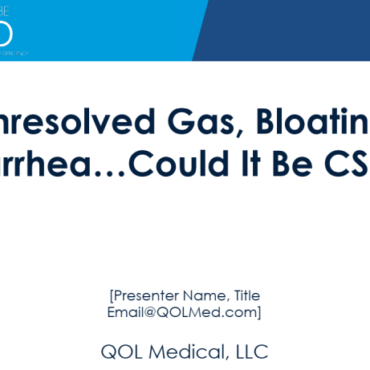